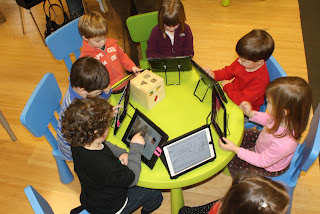 I remember reading Clay Shirky’s piece last fall about why he banned laptops and other screens from his NYU classroom, and thinking:  If Shirky, social media guru and theorist, is banning technology in his classroom, this is worth thinking about.

While I haven’t gone cold turkey in banning laptop usage in my classes yet, it’s the public-school-issued  iPad given to my 10 year old fourth grader this past fall that has made this issue salient and… downright personal. It’s this iPad that is the reason why I am, in the words of rap icons everywhere: A hater.  Forget for a moment that the iPads are part of our district’s preparation for the statewide PARCC testing (which has its own issues, critics, drawbacks). Even if the iPads were not a byproduct of this testing extravaganza, I would still be “a hater.”

First, let me say that, like Shirky, I am a fan of technology.  I spend a month in my Media and Communication course at the University of Delaware teaching students about how digital technologies have transformed power relationships in society. By shifting the powers of message production and dissemination away from centrally-controlled elite producers, digital technologies empower citizens, consumers, and audiences. And this is a fundamentally democratizing trend.

Second, I am a firm believer in play as a mode of education and engagement.  I’ve spent fifteen years studying how political entertainment – and political humor in particular – can inform, engage, and mobilize citizens in ways that formal political information simply cannot.  Such a champion of entertainment, play, and digital technologies am I, that I’m current working with Matt Baum (Political Science prof at Harvard) and a game developer to create an online social-networking based get-out-the-vote game.

But, I also recognize the limitations – not of technology, per se, but of the brain.  We are notoriously bad at task-switching.  We’re bad at managing multiple forms of input simultaneously.  As much as people (teenagers especially) claim that they are experts at “multi-tasking,” they’re not.  Not of us is ever actually multi-tasking.  We’re crappy-tasking. 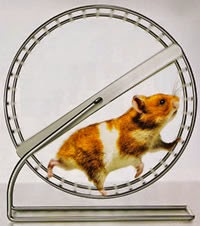 I explain it to my students this way:  Imagine that you have a little gerbil in your head, running on a little wheel.  Every time you add a stimulus or try to do some other thing, you are forcing that poor little gerbil to slow down the wheel, stop the wheel, get off the wheel, get on some OTHER wheel, start up on that new wheel and get up to speed again.  We would like to think that we have 47 gerbils in our head, all on separate wheels that are just running at the same time. Wrong.  It’s One. Very overworked. Very tired gerbil.

I remember one particularly inspirational professor I had as an undergrad, in a course on Machiavelli and Political Philosophy at the University of New Hampshire. John Kayser had a rule in his class:  students were not to take notes.  You were allowed to doodle, but not write notes.  He posited that just the mere act of writing down what he was saying was interrupting our ability to actually process what he was saying.

To this day, when I’m teaching something conceptually dense to my students, I tell them to STOP WRITING.  STOP TYPING.  THINK about what I’m saying.  (They completely freak out and start to short circuit when I do this, by the way).

I beg them: Allow that tired little gerbil to just stay on this ONE wheel, focused on this one thing.

Laughably, this implies that the biggest drawback of technology in the classroom is that the mere act of typing notes is disrupting our ability to process information.  But, we know this is the least of our worries, right? In college classrooms, laptops = a pipeline to social media, Facebook, email, Instagram.  It is a constant pressure to check, refresh, engage, comment, reply.  Again, this isn’t the fault of the will-power-lacking students. It’s the fault of the human brain.  Research shows that our brain processes the anticipation of rewards through technology (do I have a new message? Did someone fun write to me?  Did someone “like” my comment?) in the same way that we process the anticipation of: nicotine, caffeine or Opioids.

In short, people dubbed the Blackberry a “Crackberry” for a reason.

While our ten year olds aren’t necessarily on social media (although, I understand that some of them are, which, P.S. and by the way, is highly problematic for endless reasons), they do have other tempting anticipatory rewards through technology: watching the next video or getting to the next level on a game.

When we give our 10 year olds iPads in class, and tell them that they are allowed to play games and go on YouTube in between activities, we are robbing them of their opportunity to sit and reflect for a bit.  We’re exhausting that poor little Gerbil.


When working with research assistants, I often have to work hard to convince them that they must schedule in "percolation time" every single day.  That is, time away from reading, away from data analysis, and away from all technology... to sit and think about their research.  Just think about it.  Let it breathe.

Or even better, I urge them to work their tails off in the morning, then have a NON-working lunch, then, take a nap.  When they do, they begin to realize that when they wake up they suddenly have new insights and a deeper understanding of the stuff they did that morning.


Put simply: Stop the constant barrage of stimuli.  Let the gerbil rest.  If we do, he'll be able to run even faster later.  Or maybe he'll figure out a cure to cancer or discover the pathway to world peace.


[In full disclosure, I wrote this essay while also meeting about a research project with colleagues on Skype, running data on a separate project in a statistical software program, and updating my Facebook status.]

Now, excuse me as I go dark and try to give this very-tired Gerbil a break so I can come up with the world's next great idea.