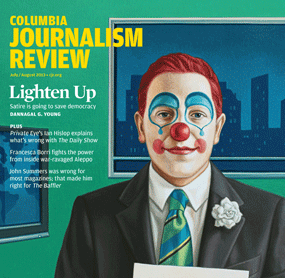 Response to Dr. DePaulo, to charge that I "Mock Single People"
OR
"When you ASSUME, you Make at ASS out of You and a Widow."

I recently came upon your response to my cover story from the July/August issue of the Columbia Journalism Review.  For the first moment of reading, I imagined that the headline of your response must have been referring to a different article from the one I had authored.  My piece, “LightenUp: How Satire with Make American Politics Relevant Again” argues that meaning, connection, and emotion must be brought back into coverage of public policy in order to respect the organic ways in which citizens live and process politics in the world.

Your response to my article characterized it as an article “mocking single people,” with the headline: Esteemed Journalism Publication Mocks Single People.

The fundamental premise of my research in the area of political communication is that the hyper-rational patriarchal model of how citizens “ought” to engage with political life is fundamentally flawed – and privileges the points of view and experiences of certain kinds of people.  Given that, and given what appears to be the nature of your own work, I would imagine you and I are not so far apart in terms of the principles that guide us.

So, let’s revisit my “mocking of single people.”

The main issue you have with my article stems from a joking exchange that is summarized in the first pages of the piece. The exchange occurred with a preeminent scholar of political communication, Dr. Lance Bennett (University of Washington). I criticized the excessive and burdensome responsibilities that an earlier edition of his text, “News: The Politics of Illusion” ascribed to citizens.  I proposed to him that asking citizens to monitor multiple news sources, fact check for themselves, and be more diligent in their news consumption indicates a misunderstanding of how most average Americans live their lives.
In so doing, “I told him that it read like it was written by a single, childless male with lots of time on his hands.

“Fortunately, he laughed. And then he admitted that when he wrote those recommendations, he was just that.”

“So there you have it. In the year 2013, at a time when there are 103 million American adults who are not married, and when fewer than half of all households are married-couple households, the esteemed Columbia Journalism Review casually and unapologetically mocks single people. In its cover story. But that wasn’t enough for the writer, who must have been oh so proud of herself for her clever singles bashing. No, she also altercasts the person she was deriding into joining in on the singlism.

I guess they are both married, perhaps married with children, and feel infinitely superior to their younger single selves – and, I suppose, every other single person in the nation and the world.

Now I suppose they will go home to their spouses, with whom they perhaps split the tasks of everyday life.

Or maybe they have partners who do all the cooking and cleaning (and child care, if they have kids) and everything else. Gee, I wonder what they do with all the free time they never had when they were single, and had to do all of those things for themselves.”

And now [Drumroll please...] Dr. DePaulo, a lesson for you about assumptions…

Dr. DePaulo, what the editors at Columbia Journalism Review and I opted to exclude from this exchange with Bennett, was the context surrounding this meeting:

I met with Bennett in August 2007 at the Annual Meeting of the American Political Science Association.

I was a 31 year old widow with a 2 year old baby boy named Baxter.  I was a tenure-track Assistant Professor on a research track at the University of Delaware.

I had spent November 2005 through July 2006 caring for my best friend and spouse, Michael, as he battled a brain tumor.  He lived full time at Jefferson University Hospital for Neuroscience, then at Magee Rehabilitation Hospital.  Every day – particularly from March through July 2006 - I dropped my 1 year old son at daycare, trained to the hospital in Philadelphia, spent the day feeding and caring for my brilliant husband who had no short term memory, was, blind, incontinent, and yet made us all laugh with his wit and determination.

After he died in July, I had just accepted a full time tenure track position at UDel.  You can imagine how daunting this prospect was to a widowed woman who had a baby, no spouse (by no choice of her own), and who had yet to defend her dissertation.  (Right.  I was ABD at the time of my hiring date).  I was grief-stricken, financially up a creek since we had just bought a new home in 2005 with a mortgage made for two incomes (my husband had basic life insurance of 50K, enough to supplement my income and pay for my son’s daycare, but that’s it).

So, Dr. DePaulo, your guess was wrong.  As were your assumptions about my feeling “infinitely superior” to my younger single self.

I was speaking to Bennett at a time when the salience of the shit that real people live with in real life was at an all-time high for me.  I had the perspective and clarity to call out some for the dominant assumptions plaguing my field because life had handed me an untenable situation.

My statement to Bennett, ill-worded, perhaps excessively glib, was more a reflection on how ill-conceived it is to impart a patriarchal, rational model of citizenship onto people who are doing exactly what they are supposed to be doing: working, playing, living, loving, taking care of families (if they choose to have one), and abiding by our great social contract to not harm others.


It seems in your attempt to protect the reputation and dignity of your concept of “singlism,” you yourself have fallen victim to some of the cognitive phenomena responsible for discrimination and prejudice that lead to harmful errors in judgment in the first place. Namely, selective perception, confirmation bias, or premature closure.

I certainly don’t believe that was your intent.  As it was never my intent to insult someone who is single.


So, let this be a lesson – perhaps to both of us, to be careful, because sometimes, when we study something so closely and constantly, we can no longer see the possibility that we might be wrong.  And when that happens, what we’re doing ceases to be science.

And sometimes, when you assume, you make as ASS out of U and ... a widow.