Simba, Mufasa, and the Mike Angel 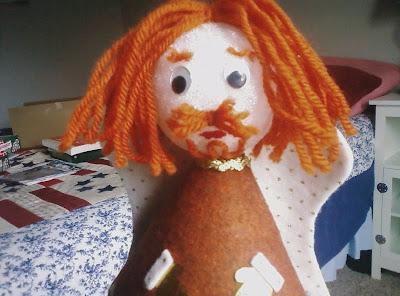 So, PJ and I had been having some trouble with Baxter of late... talking back, not listening, like he was distancing himself or something - Using a weird cartoon voice, turning all limp when we'd hug him. I was racking my brain trying to figure out what was going on.

PJ and I had been to our parent-teacher conference with his kindergarten teacher 2 weeks ago, and I think it fed into a bad spiral we were already having with Bax. Basically, she said he can't stay in his seat. He interrupts her, corrects her, and has a hard time accepting responsibility for his actions.

I think PJ and I were broken hearted, but instead of going home and snuggling the snarkiness out of Baxter, we became determined to nip this in the bud. So we started coming down hard... on everything. But after a week, it was clear that this was not the right way. Baxter was shutting down - and disconnecting from us.

So, after long conversations with my parents and PJ's parents, we launched a new parenting campaign last week. Love, affection, gentle instruction and correction. A calmer energy in the house... less stress and more kindness. Less rushing and more breathing.

And you know what? Baxter made his return to us.

As we made these subtle changes, I began thinking about all of this in light of a conversation with UD's own guru of mindfulness, Scott Caplan, about Baxter's emotional intelligence, and my role in fostering an emotionally healthy child. Scott suggested I take a look at a book by John Gottman "Raising an Emotionally Intelligent Child." I peeked at a quiz in the beginning of the book.

Do you treat your child's anger like it's a problem?
Do you allow your child to see you experience sadness?

...it took like 3o seconds for me to realize... in my quest to create a happy and "normal" life for Baxter, starting in 2006... I might have inadvertently stunted his emotional development. I never let him see me cry. I still tend to come down hard when baxter freaks out about stuff in a way i deem "age inappropriate". To avoid freaking Baxter out, I tend to speak of Mike in light happy terms. I never let him witness my grief.

I think when he was little this approach made some sense. But, as he's getting older and wiser, maybe it's time to reconsider how to talk about these things. Well, on Saturday, the opportunity presented itself.

While trimming our tree on Saturday afternoon, I came many beautiful decorations which were Mike's before we were even a couple. One of them was the "Mike Angel," a gift from our friend Sandra from 1999. The "Mike Angel" was a hilariously funny addition to our tree for years. She made it out of a styrofoam ball and orange yarn and it really looks just like Mike Young.

So, Saturday, Baxter found it and said, "What's this?" And I said, "Do you think it looks like anyone?" and he said, "Daddy Mike?" I told Bax all about it and how much we loved it and used to have it on our tree when we lived in Philly.

I decided this was an opportunity to be honest with Bax about my feelings. I told him that if he wanted, he could take the angel and put it up in his room, but I would prefer to not have it atop our main tree because seeing it made me feel very sad. I told him I miss Daddy Mike, especially around the holidays and when I see the angel I'm reminded of how much I miss him - so if he wanted it in his room, that would be ok.

"Are you going to not want to come into my room then?"

"Of course I will! I don't mind seeing it, but I don't think I want it right in the middle of the family room all the time, you know?"

He brought it upstairs, and came right down. "I put it next to my bed so I can pray to it." (an interesting comment from a son whose parents don't really talk about "praying".).

In the morning on Sunday, I went in to snuggle with Bax. He pointed to the angel. "Do you want to say a prayer to Daddy Mike?"

"Ok, but I do talk to him all the time. Even when I'm not looking at the Daddy Mike Angel."

"Me too. Do you pray that he likes PJ? Cause he never met him."

..."sort of, yeah." The fact that in Bax's mind, Mike would be jealous of Peej not for his marriage to me, but because of the opportunity to be with Bax... is so perfect. "I pray that he's up there [I point at the sky] looking down on you and keeping you safe and protected."

Now, before I say what Baxter said next, let me just say that Baxter has been fascinated with the movie "the Lion King" for years. I have refrained from buying it for fear that the plot about Simba's father Mufasa, dying, is too close to home for Bax. But whenever he's at Michelle's house, he asks to watch it. He wants to fall asleep to it. He talks about the film all the time. Instead of picking up on the cue that perhaps this film is helping Bax work through some things, I have continued to try to shield him from the "dead father" plot altogether, not allowing the movie into our house.

So, after I told bax that I often pray for Mike to look down on Baxter, Baxter sits down next to me on his bed and touches my knee.

"But he's not up there!" he says quietly, but wide-eyed.

"NOoooo." whispering, "he's in here," he says smiling and pointing to his chest. "You know in Lion King, when Simba looks at his reflection in the water? Remember how he 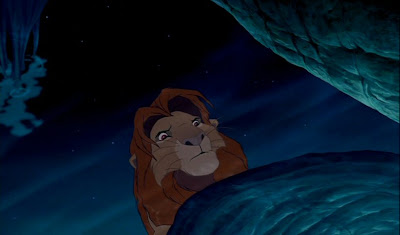 sees Mufasa? It's not his imagination, Mom. Mufasa is inside him. Like Daddy Mike is inside me.... " now Baxter is speaking quicky - like's he's on a roll and has been eager to get all this out. "Remember when I used to go to Tae Kwon Do?'' He asks. (We stopped classes in July, so this is not a recent memory). "Daddy Mike was inside me, helping me. Remember how you were surprised that I could do all those push-ups? Daddy Mike helped me do them."

All this time, all this stuff has been rattling around inside my son. We've been so busy with the baby - so busy just trying to keep the house running, trying to make sure that Baxter likes his new little sister... And in my attempt to keep him on the straight and narrow, by being strict and a task-master, somewhere, I lost sight of my role. Thank gosh he's young and nimble. Thank gosh PJ and I realized that we need to step back and rethink our approach.

We have a wonderful and amazing little boy.
Posted by Danna at 12:22 PM

Another really great book is "Baby Hearts: A Guide to Giving Your Child an Emotional Headstart." It is astounding what children learn by just watching us.

Everyday I try to do three things: laugh, cry, and learn. I accomplished all three reading this post. Thanks for sharing.

Binary Options is the way to [url=http://www.easybinarycash.com/]make money[/url] securely online

I really enjoy to be here. Your have great insight. Thank you
-------------------------
Bonus senza deposito
poker bonus ohne einzahlung
Poker sign up bonus
Check out the rules of the game in the most popular form of poker - Texas Hold'em. Card sets are very similar to our native five card poker but the rules are different. To do this, visit the most popular website on the subject and learn to play. Learning the basics does not take much time. After reading the rules of Poker time to choose the right poker room. I recommend: Pokerstars popular and a lot of freerolls for Poles Titan Poker - free freeroll for Poles on Sunday
Sin Deposito Bonos
Poker bonus sans depot
The final step is to find the free tournament. As it free poker no deposit.
Gives you a adress the biggest daily forum where you can find a list of current freeroll poker rooms available. Stay date new topics in discussion forums and given gradually registrants in the new poker rooms. After a while, you'll be able to play several tournaments a day and if you played and increased skills-you can earn a pair of gold ... no deposit bonuses, free poker money, or even a few hundred per month.
Laptop computers for poker
Texas holdem play Tv
Viteo Danish
Bonus titan senza deposito, gratis poker.

Best Article buy pain meds online Excellent post. I appreciate this site. Stick with it! Because the admin of this web page is working, no doubt very quickly it will be well-known, due to its quality contents.This website was how do you say it? Relevant!! Finally, I’ve found something that helped me.
Best Article buy Roxicodone Online Excellent post
buy Xanax Online
buy Oxycodone Online

Best Article buy medications online Excellent post. I appreciate this site. Stick with it! Because the admin of this web page is working, no doubt very quickly it will be well-known, due to its quality contents.This website was how do you say it? Relevant!! Finally, I’ve found something that helped me.
buy Roxicodone Online