So, I've noticed, in my ranting to PJ about everything-election 2008, that my conversation often turns to Mike. And, when talking about Mike, everything turns to the election. I'm going to use this space to try - try... to clear my head.

The tie between the election and Mike: For me, I think there are a lot of highly salient and emotional things at play.


1) Mike stayed up with me during the nights after September 11th, 2001 as I cried, not out of fear of another attack, but out of a fear of my country's response.

2) Mike and I protested the Iraq war in March 2003 in Philadelphia. That war is still being fought and Mike has been dead for over 2 years.

3) Mike and I sat together on July 27, 2004 and watched as Senator Barack Obama addressed the DNC. Mike and I were giddy with excitement and Mike announced that he couldn't wait for this man to run for president:

And as much as I am trying to keep my perspective in this election, I am feeling the same sense of powerlessness that I did while serving as Mike's advocate in the hospital day after day. It started with a sense of confidence - unflappable faith in our ability to overcome this thing. And suddenly, something rendered me weary. In Spring 2006, it was the one surgery that shook my footing in early April and changed the entire picture. And then, last week, with the announcement of Palin and the *excitement* surrounding her, I started to feel similarly weak in the knees.

I realize it may seem crass to make this comparison - but when I think about what is ultimately important, I feel very little distance between the health of my domestic family and the health of my world. I have always felt this way. I was raised being told that it would be disappointing to try to help outside your own family, that you can really "only take care of your own," but that just didn't sit right with me.

Among the things that I just don't feel the capacity to understand:


So, since Palin's nomination, I'm obsessed.

First, I feat that the media have tied their own hands because of the Bullsh*t in their coverage of Hillary over the past 15-16 years.

It goes like this: Hillary tries to work on healthcare behind closed doors and has a contentious relationship with the press. from 92 until 98, the Clintons develop a notorious and well-documention TENSE relationship with journalists.

2007-08: Hillary runs for the democratic nomination. Press is hard on her. I really think they just don't like her. I don't, on the other hand, think it was about her gender - but rather - a sincere lack of affection.

However, the charges are of sexism. So now, the media are confronted with Gov Palin. They now have another woman candidate, an outsider new to Washington. And so the kids gloves come on. NOT because the media are biased against liberals or anything like that - but because journalists LOVE: a) Novelty, b) A surprise, unexpected narrative, c) an interesting biography. And because d) they don't want to look like sexist assholes once again.

I originally started writing this because I have been losing sleep this week, staying up to watch the RNC, and then lying paralyzed with too much anxiety post-convention-viewing to fall asleep.

Some more things rattling around in my mind here:

I am told that to think about Sarah Palin's family and children - or to talk about them is sexist.

The issue of the 5 month old baby is one that I can't get my head around and don't want to go near - because, for gosh sakes - I still want to run for office someday! But suffice it to say, watching her speech and that baby in the arms of Cindy McCain and then its father... there were a lot of questions in my mind about how that whole situation is going to work. I have no answers, just questions. (and remember, I AM a working mom, one who returned to her research when bax was 6 months old...).

However, we are also told that to discuss her daughter Bristol's pregnancy is off-limits.

If you are a candidate who does not support abortion rights - even in cases of rape or incest (see AP article) - and you are a candidate whose position on sex-education is less than clear (see LA Times article), I think it is fair to explore your policy positions in light of the relevant circumstances in which your family currently finds itself.

The McCain platform is strongly and clearly supportive only of abstinence-only education. And yet here - Bristol Palin - who, ostensibly was raised in a loving, supporting, Christian, abstinence-until-marriage-urging household, is pregnant.

For Bristol, the consequences of having unsafe sex is that she will birth a child, who will be raised by her and likely with the help of the family around her.

When Laura Bush introduced the President the other night, touting his increased spending on AIDS programs in Africa over the last 8 years, PJ piped up: "Ignoring the fact that a ton of it is dedicated to abstinence-only programs." The President's Emergency Plan for AIDS Relief (PEPFAR) does provide much needed drugs to the region, but the prevention program is centered around Churches, and does not support condom distribution OR needle exchange programs. More here

Enough. For now. I will leave you with a couple anecdotes, beautiful and lovely.

The other night, PJ had plans and was scheduled to get home after bax fell asleep. At bedtime, Baxter said, "I miss my dad. I wish he was here to say goodnight." 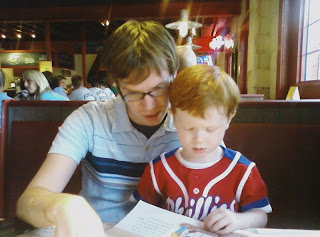 And for the first time in a very long time, I could say, with all honesty, "He'll be back. You'll see him in the morning."

The second one: PJ is a huge phillies fan. Big time. And loves teaching Baxter about the game. Bax asks some great questions, too. Last night, out at a restaurant, the two sat opposite me in a booth, where they could watch the game. Bax was wearing his new Phillies jersey I just bought him, and he was snuggled up to PJ asking him tons of questions. PJ loved it! He was all Fatherly, instructing Bax in the rules to the sport.

At one point, Baxter sneaked under the table over to me to say hi, and then sneaked back to ask PJ another baseball question. Once bax got back up on the seat snuggled in next to his dad, PJ looked at me thoughtfully and simply said, "Thank you." I didn't push him to say "thank you for what." I got it.

And I leave you with this photo - Bax and PJ checking out a comic book at the restaurant last night.
Posted by Danna at 8:02 AM 17 comments: