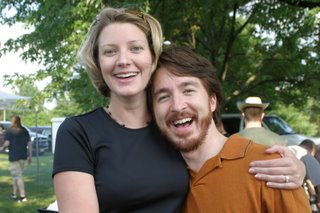 I'm feeling far from Mike today. The real Mike, I mean. So these photos are to remind everyone of who Mike really is. [And yes, I am a giant giant girl... as evidenced by the photo on the left.] The one on the right was taken on the ferry to Martha's Vineyard in July 2002 [photo featuring Scott and Tom-tom]. I feel like it really captures Mike. Goofy goofy Mike.

Today he was at least too fatigued to act as impulsive as yesterday. Apparently, after he pulled out the picc line yesterday, they got another IV in him which he then proceeded to pull out in the night. They got a new picc line and IV in him today, wrapped them in gauze to hide them and restrained Mike's wrists loosely to the bed so that he couldn't pull out the picc or IV.

The resident says that the plan is to start radiation tomorrow. Today they got an MRI and CT scan to use to map the coordinates of the tumor onto the mask - or something like that. Rather than bringing him by ambulance each day from the Gibbon building to radiotherapy 1 block away, they're going to try to move him to the NICU that is in house in the other Thomas Jefferson building where radiation happens. That will be easier on everyone - mike included. And I asked if that other unit is equipped to handle someone who shows such impulsive behavior as Mike's and they said absolutely.

When he got back from the mapping process, I got him to be awake for a few minutes. "Who am I, Mike?"

"Smoosher!" True dat. For those of you who don't know just how lame Mike and I are ...now you do. We call each other smoosher (def. n. One who smooshes.) "Smoosher" is the inscription on each of our wedding bands.

He seemed content. I gave him my big stuffed lion, "Hobbes," and he snuggled up to him and dozed off again.

I feel like I need to take a moment to say something that's been on my mind. I know that many of us are having a hard time grasping what's going on. Most of us - myself most of all - would like to imagine that Mike will be fine. So much so that we feel like there must be some answer - some magic solution that will just bring Mike back. The truth is... we just don't know. We don't know. That's it. People can ask me a thousand times "Why didn't they do x?" or "Why haven't they done y?" or worse "I think they should have blah blah blah." but the situation is so freaking complicated that I cannot begin to articulate the answers to those questions. His chart is unbelievably thick. 9 surgeries. Almost 50 total days in the ICU. His tumor affects every basic body function: cortisol, thyroid, electrolyte balance and sodium, body temperature, hunger, thirst, vision, as well as short-term memory, affective disposition, and other subtle neurological functions. For any of us to imply that we know what should be done here is just whacky. Coming from a place of love, yes. But whacky.

And while my lawyer friends might sh*t themselves as they read this, it does not help me to try to pin blame on someone for any piece of this situation. Yes, I'm pissed. Yes, I wish there were an easy answer. There's not. And I'm not the kind of bitter person who will sit and find someone to be angry at over what appears to be shitty shitty shitty luck. I was not always this way. Quite the opposite. I'm from New Hampshire: "Live free or Die." Translation: Don't trust anyone. But I learned from a very wise and peaceful (and handsome) gentleman to change my ways.

When Mike was first diagnosed with the tumor on Oct 20th last year, I was beside myself with anger and pain. One night I lost it, "It's not fair! It's just not fair!" I wailed like an angst-ridden child. "We just got married. We have a baby. We're just starting our lives! It's not fair!"

Freaking Mike. Always so reasonable. But he was right. So let's all be constructive in how we approach this unthinkable situation. And let's try to channel Mr. Young, shall we? It's just luck. Dumb luck.

So yes, of course we can be angry and bitter sometimes, but let's not let it cloud our ability to see straight.

PS: not sure I'm saying this to anyone in particular or if it's just a letter to myself... but there you have it.
Posted by Danna at 8:27 PM

What effects of the radiation should visitors expect (more fatigue than usual, e.g.)?

Good question, Peter. From what I've learned, radiation might tire him out, but he's so tired anyway that I can't imagine that it should make a huge amount of difference. Long term, radiation might complicate neurological issues that are already present stemming from the hypothalamic region of the brain. So why do it you ask? Well, if the tumor continues to grow, Mike can't possibly survive. It needs to be contained.

Danna - Tresa has been keeping us posted on Mike (and you and Baxter) and I just wanted to tell you that I've been reading your blog which has moved me to both tears and laughter. I wish you all the best and want you to know that we're all thinking about you and sending our most positive thoughts your way, Mike's way, and Baxter's way. I'm sure it can't always be easy to write and post your blog, but please know that as much as it's helping you, it's helping your friends as well. Love, Tracy P your annenberg crony

I am not asking why and why not, just wishing you guys all the best. i wish i had superpower to heal people...

Hi Danna-
It's Mike's Mask and Wig friend Larry Freedman checking in. All I can say is that I'm thinking about you guys and praying for the best. Please give Mike a big hug for me. He's one of my favorite people in the world.

Oh, and if it's not too much trouble, could you slap Pete Kohn across the face for me as well?

Thanks, Larry. Consider Petey slapped. Petey - watch yourself next time you're in the NICU.

For all our sakes, Danna, thanks so much for the not-so-gentle reminder of the nature of Mike's spirit and your support therof. You are both cut from a different pattern than average bears as you explained in Wed. nite's entry. Our love for you both should be based on recognizing this difference and supporting it. It certainly is the common paradigm to be angry, frustrated, and wanting to take some fault-finding action but let's all remember these two folks are so special they are well beyond the "common".

Let's all support them in the manner they wish - love and support. Let's count to 10 or even 100 when planning on saying something critical in these instances - and perhaps many others.

We're still praying for a miracle. Love to all, Mimi and Popi
PS I think Dad wrote this for your Irish Mother. Thank you, Dave, for reminding us of Mike's spirit. Hugs, MiMi

Glad to hear that Mikey will be getting radiation.

Also, thanks for setting the record straight on what is useful for you and what is not. I love a straight shootin' gal!

Did you check with your ex-gov Jean Shaheen that the Live Free or Die motto really translates to "trust nobody"?? That's what comes from living next door to Vermonters, I guess! Perhaps Maple Sugar envy??

Take it easy, sweetie--one day at a time.

About that photo. I love how you can see Tom thinking, "If Mike makes one more comment about me being fat..."

Sensing the tension that had suddenly descended on the poop deck, Mike switched gears and told some joke ending with the punchline, "That's not a duck," bringing us all to the verge of laughter, and narrowly avoiding fisticuffs with Tom, which surely would have gotten us kicked off the Martha's Vineyard ferry for life.

So, while he may have an inoperable brain tumor, we should all be thankful that, thanks to his quick thinking and unerring sense of tact, Mike can still ride the ferry with wild abandon. And a good duck joke.

Paul, Austin and I send out a big hug!

Had a good bawl looking at those pictures of Mike. His smile certainly is infectious, in good times and even in droopy eye, bald head and monster scar times. We love you and Mike and Baxter.

I honestly could hear Mike's laugh in my head when i saw the pix you posted. made me smile big time. thanks. love,susan

from someone who's seen you cry and weep over an 19 year old conservative republican boyfriend, i can now firmly confirm: mike's influence really has had a profound effect on your mental health! (that is luck as well....finding this wonderful guy.) i'm "proud" of you for who you are through all of this. proud is not quite the right word -- respect, admire, am grateful for. i think we tend to believe that doctors and science have all the answers, and if something doesn't go right they clearly did something wrong. i feel like we also tend to think everything runs 100% perfectly in the hospital and are stunned to learn when it doesn't always. we're all human. i have no doubt mike is under great care, and i also have no doubts that his doctors are doing their very best. onward...to who knows where...but onward. love, t

I have a photo of Mike on my wall at work. He is in one of his "poses" on stage with Kelly, Kevin and me. It's from my CSZ days. I look at it everyday and say a prayer that we'll all see him in that same pose someday.