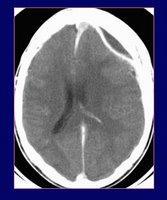 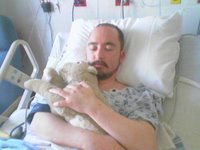 [Left: Photo of Mike sleeping with Hobbes this afternoon. Right: Photo of a fluid collection post-craniotomy - not Mike's... read on]

Mike was more himself today. He was upbeat, showed a sense of humor and was more alert. His memory does not appear to store info for longer than 1 minute. There is still no integration of info into longterm memory.

This morning, Dr. Georgia was there (love her). She recommended that I request a family sit-down meeting with Mike’s doctors to assess where we are and where we’re heading. I’m working on arranging it.

In the meantime, couple of new pieces of information. First, the tumor has formed a cyst on the top of it that is pressing up into the brain. Second, there is a collection of fluid under the right front bone plate that they fear may be infected. [See photo on the right of a similar situation post-craniotomy. Not Mike’s though. The inverted bulge on the right is a pool of fluid under the skull] It’s common to have this collection after a craniotomy, but it usually reabsorbs. From what I can gather, Mike’s has not reabsorbed. Infectious Diseases docs came today and are putting Mike on hardcore antibiotics through his IV. They’re also doing a spinal tap to test for infection (since spinal fluid and brain fluid are in communication with each other it would likely show up there.) An infection would explain Mike’s ongoing spiking fevers (104, 102, 103 etc). Needless to say, radiation is postponed because radiation in the face of infection can be catastrophic.

It’s interesting that there is this frontal lobe issue now. 2 days ago when Mike was really haywire, one of the nurses described him as acting “frontal.” “We usually see these kinds of behaviors in patients with trauma to the frontal lobes,” she said. These behaviors include acting impulsively and being extremely fascinating with the sense of touch – pulling at wires, touching this blankets, reaching for things, ripping paper apart (all of which he’s been doing). Today, even while he was happier and more sort of Mike-like, he was oddly tactile, rubbing his stuffed animal like a toddler does a blanket, and pulling at his blankets repeatedly.

Today we had a lot of nice visits with Crazy Susan Murphy, Josh (who Mike correctly referred to as “Jorsh), Diane J. (tomtom’s mom), and Kelly. When Diane left for the cafeteria to get Mike some pie, about 30 seconds later I asked, “Who was the woman who was just here?” He replied, “Mary Roney.” And no, I am not kidding. Dude, he’s hooked on Roney! I then told him it was a dear friend’s mother. He thought a second.

Roney, is there something I need to know about you and my husband?

He was fun to be with tonight with Andy and Kevin. Didn't really like his dinner, said he wasn't hungry. (Looking at it, I can't say I blame him.) Ate grapes and sipped water. Sent one of us to get Pepsi Wild Cherry, which he sipped with the OK first from Danna and then from Nicole The Nurse. Joked back when someone initiated. Says he's bored. Definitely tactile, even as it was pointed out to him. He's persistent -- put forth much effort to remember things in the recent past in response to questions, and wouldn't give up until he gave an answer he was satisfied with or until someone let him off the hook by changing the subject. Running what looked like a fever of 100.

when i was there earlier, he was "checking out" pix of shakira in his star magazine (as best as he could)... so that could definitely have left him speechless for a spell. i talked with him about Baxter and the latest changes in the White House. When i asked him if he knew who Karl Rove was, he said Speaker of the House. I couldn't help but laugh at that comment -- for once i was happy that he was wrong!!! (Had to be careful b/c I wasn't sure if the nurse who was tending to him was a Republican-- and she had a needle in her hand!!!). He seemed to recall that Danna had popped in a few moments earler (so that was good)... the picture truly captures how he looks when he's resting. :-) am glad to hear he was more active/talkative tonite than at lunchtime-- i take that as a good sign. maybe all the antibiotics are kicking in...?

From E. J. and Rob in NYC....We're reading your posts everyday and sending you and Mike (and Baxter --who is just the cutest) all of our love and support.